The people of KUUC are committed to actively creating compassionate community and working for a fair and peaceful world.

KUUC is a Welcoming Congregation and a Green Sanctuary. We welcome seekers from every walk of life.

The Keene Unitarian Universalist Church is an independent congregation which has been part of the fabric of the Monadnock Region since its founding in 1824 by members of the Congregational Church, who seceded over the issue of Trinitarianism vs. Unitarianism. Six years later, they built their first building, the Unitarian Church at the corner of Main and Church Streets. The present granite building at 69 Washington Street was built in 1894. The Tiffany Truth Window was added in 1900 as a memorial to the founding members.

As a congregation, we are affiliated with the Unitarian Universalist Association (UUA) headquartered in Boston, MA and are part of its New England Region. Both the UUA and the region provide helpful staff members and essential resources through which we operate independently and democratically.

The Edwards plaque is the only plaque located on the south wall of the sanctuary.

It commemorates Thomas McKey Edwards and his wife Mary Hart Fiske.  According to Jim Smart’s The Keene Unitarian Universalist Church:  the building and its people, the couple contributed to the community with “great public spirit.”

Thomas Edwards had quite a distinguished career.  After graduating from Dartmouth he practiced law in Keene for about thirty years.  He also served as Keene’s postmaster for another dozen.  He was elected to the New Hampshire legislature for eight years and served four year in the U. S. Congress (1859-63).

In 1840, Edwards married Mary Hart Fiske.  Mary was one of the charter members of the Ladies Charitable Society which had “for its object and purposes the relieving of the wants of the poor of the city.” (Page 146)  She served as vice president of the Society from 1877 to 1887.  She also banded together with others to form the Rural Improvement Society, whose aim was to protect Keene’s forested land.  Mary also bore seven children, five daughters and two sons.

Their fifth child, Mary Fiske Elliot petitioned the church to have a memorial tablet placed in the church in honor of her parents and deceased siblings.  She and her sister Isabel Sherwin knew of a young Keene native by the name of Barry Faulkner through church connections.  His Harvard roommate Homer was the son of Augustus Saint-Gaudens, renowned sculptor.  Barry spent the summer of 1900 at the Cornish estate of the Saint-Gaudens family. Presumably he tried his hand at sculpting for he accepted the commission to create the Edwards bas-relief plaque from white Danbury (VT) marble in 1906.

Apparently sculpting didn’t suit him.  The Edwards plaque may be the only public display of a sculpture by Barry Faulkner.  In 1907 he received a fellowship to study at the American Academy in Rome.  In 1910 he returned from Italy and began his career as a muralist.

Barry Faulkner went on to become the most noted American muralist of the Twentieth Century.  His murals decorate homes and public buildings in Europe, Canada and the U.S.  They include the Bushnell Auditorium in Hartford, CT (1931), RCA Building Rockefeller Center, NYC (1932), the National Archives Building (1934-36), the Oregon State capitol (1937-38), the Senate Chamber at the Statehouse in Concord (1942), the John Hancock Building (1949) and many more.

Several murals are visible here in Keene. Central Square (1938-48) is in the entry of the old Elliot Community Hospital building on the Keene State Campus.  The mural Men of Monadnock (1950) is in the current Bank of America building on Central Square.  Two are at the Historical Society Cheshire County, including his last mural Advent of the Railroad (1955).  And of course, there’s the Wall Dogs mural commemorating Barry Faulkner on the corner of Church and Main Streets, the site of the original Unitarian Church.

Thanks to Barry Faulkner and the Art of the Muralist by Alan Rumrill and our own Carl B. Jacobs for pertinent information.

The Seventy-one Associates who established KUUC: 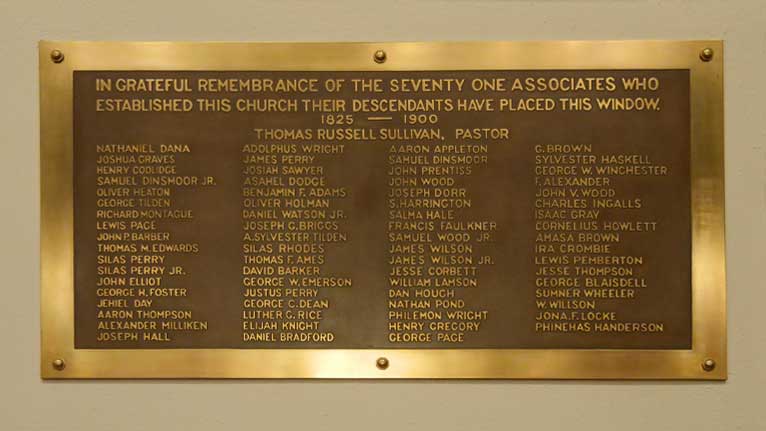 The first page of the church’s covenant book lists seventy-one men as associate founders. Associate founders were those men who first joined the Unitarian community after its founding. The plaque, like the Truth window, was executed and installed by the Tiffany Company. It was restored to its original luster in 2005 by Michael Smart.

Seventy-one associate members were the men who contributed to getting the church on a firm social and financial foundation. They often acted informally, but essentially they took on a responsibility similar to that of today’s Board of Trustees.

One wonders why the plaque committee, composed of women, did not include the significant contributions of their sex during the same period. The church’s published history pp. 150-51 identifies seventy-one women pp. 150-51 who also deserve to be recognized as Associate Founders.

Some Interesting Facts about KUUC: 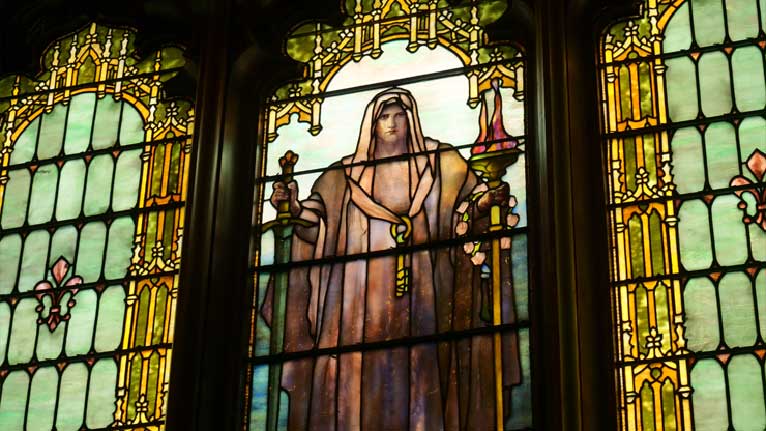 Truth was the topic of the first Unitarian sermon in Keene, and was a natural theme for a memorial window, which was installed in December 1900, as “a memorial window to the Seventy Associates who founded the church.” The window was designed by the Tiffany Glass Company, which was at its height of productivity and creativity during the turn of the century, producing eight known “Truth” windows.

The window contains an androgynous figure, holding a torch which signifies Truth’s illuminating power, and a sword, representing the practical embodiment of truth in laws, institutions… Around its neck is a key, symbolizing the ability to unlock and get beyond barriers of ignorance. The wreath of roses? Well, Truth can be as sweet as a rose and as painful as the thorns, both to those who speak it and to those who listen!

The New Hampshire Sentinel described the window as follows:

The window . . . has been placed in position at the head of the church in the center of the chancel or alcove in rear of the pulpit. The window thus becomes a most conspicuous object and its tone and design are happily such as to harmonize admirably with the general plan and coloring of the interior, to which it adds a richness and finish that is now seen to have been very essential to the proper development of the architect’s design . . . 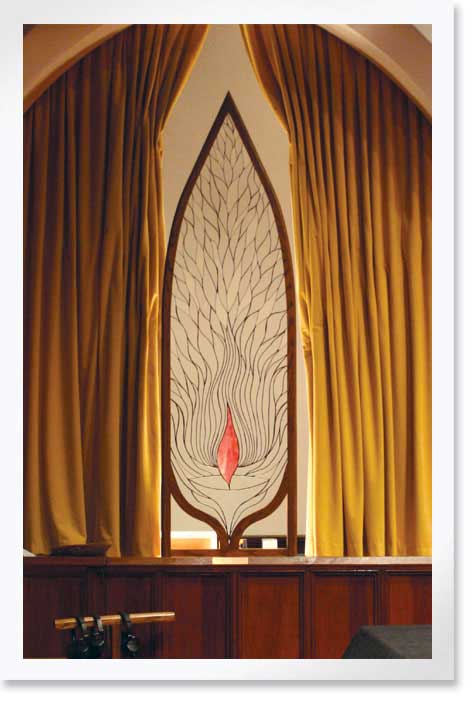 The Chalice Blossom Window was designed by Craig Stockwell in memory of David La Mar, an active and well-liked member of the church. David abhorred the vacuum in the pulpit-side chancel, and initiated discussion with the Board of Trustees. Before any decisions were made, David died in January 1993. Funds which had been given in David’s memory were used to fund Craig’s design.

The Chalice Blossom glass window was chosen to complement and not compete with the Truth window. The window is about two and a half feet wide and stands six feet tall.

Excerpts from The Keene Unitarian Universalist Church: The Building and its People. James Smart. 1996. Available in the KUUC library.

What is Unitarian Universalism?

IN UNITARIAN UNIVERSALISM, you can bring your whole self: your full identity, your questioning mind, your expansive heart. Our SEVEN PRINCIPLES and SIX SOURCES Support the Free and Responsible Search for Truth and Meaning. For more information, http://www.uua.org/beliefs/what-we-believe

To watch a video, https://www.uua.org/beliefs/who-we-are/video/use-video

THE SIX SOURCES
These are the six sources our congregations affirm and promote.